There is a special relationship that exists between an artist and an audience. Each entity feeds off the other’s energy in a circular, call-and-response-like dance. And the tighter the relationship becomes between the two, the more magic is created.

Recently, my band (The Hawthornes) played a couple of gigs at OTPH and I also have watched a couple of other shows there, and I’ve discovered something: What I once thought of as a cool, laid back, venue in which to catch up with friends is still that, but it has an alter ego that comes out once a band sets up. And that alter ego is all about some live music.

We began playing at OTPH shortly after it opened and while it was still building its community of regulars. During that time a few bands began to filter in as well, bringing their respective cadre of followers with them. For our first shows there, we played to some familiar faces–folks who either knew us personally or saw us at other local events. They were the people that would still support us even if we weren’t that good (and believe me, I think everyone need some folks like that in their life!).

The day before Thanksgiving, we had a full house at OTPH. And the energy from the crowd fueled a positive vibe in us on stage. By the end of the second set, we all knew that everyone played a part in making that one of the most fun gigs we’ve had. It happened again a couple weeks ago, where there were scores of people who hadn’t heard us before, but heard that OTPH usually has some kicking bands, so they came to see for themselves. Again, the house was packed and the energy was palpable. 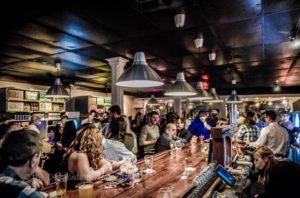 I see OTPH as a music venue now, as much as anything else. Don’t get me wrong, if there’s no band there, it still holds that laid-back charm that attracted most people to come and hang out in the first place. But once a band plugs in, the place transforms.

It’s not just the bands that have created that vibe, though. It’s the community of people that support the place–those who have been there since the beginning, as well as those who only recently heard about it and want to add to the magic.

Fed by shared interest, the community is growing organically. More people are showing up to see the music. And with more people there, they are feeding the musicians with what they need to create more moments on stage. Which, in turn, attracts more people…and, you get where I’m heading with this.

We’re building something at OTPH, y’all…Artist and audience alike. And it’s a beautiful thing to watch grow. Be cool and until next time…let the music play! 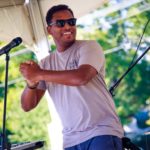 My name is Adé and I love music. I mean LOVE. Like, the kind of love that causes you to make irrational life decisions. The kind of love for which you forego a full scholarship at a top university and a commission in the U.S. Navy, just for a shot at a record contract (#truestory).
But I digress.
As I was saying, my name is Adé, I love music, and I am the lead vocalist for The Hawthornes. We’re a local 4-piece funk/rock/soul fusion unit. And we wouldn’t be here without the unique OTC community helping to make, support and define the local music scene.