Our area is saturated with talent and as we celebrate Black History Month, we will be highlighting some African American Artists that are making waves in the LKN art scene in a big way!

CONNOR TO PERFORM IN ONE MAN SHOW: RIVETING AND INSPIRING

Michael D. Connor, grandson of John Connor, will be performing his self-directed “The Foreshadowing of a People: Reflections from the Past,” on several occasions in Cornelius during the month of February. The piece is approximately 20 minutes and will accompany other Black History Month art exhibitions at Old Town Public House, 21314 Catawba Ave 28031. Conner takes on the personalities of “Seven Great Negro Orators” to honor the message of these monumental figures. Excerpts from speeches and writings of Nat Turner, Fredrick Douglass, Booker T. Washington, W.E.B. Dubois, Marcus Garvey, Malcolm X and Dr. Martin Luther King Jr His acting is exceptional and thought provoking.

Michael D. Connor is a Professor of Theatre Arts, Professional Actor, Playwright and Director. In his theatre instruction at Livingstone College, he has integrated these disciplines to bring awareness to topics affecting the community the college serves. Mr. Connor feels strongly that people in the community and Livingstone College students appreciate being made aware of potential problems, so he’s written plays about issues including domestic violence, homelessness, teenage pregnancy and diabetes. A Charlotte, N.C., native, Mr. Connor earned a Bachelor’s Degree in Theatre and English from Shaw University and a Master’s Degree in Theatre and Drama from Indiana University. He also studied Radio, TV and Motion Pictures at the University of North Carolina at Chapel Hill. Mr. Connor has worked on Broadway while studying playwriting at the Negro Ensemble Company, and he has worked in Hollywood and written a play about legendary screen actress Bette Davis, for whom he served as a personal assistant. He has taught and performed in Japan. 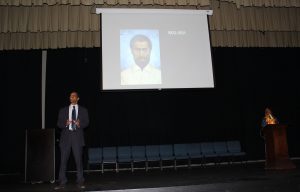 Mr. Connor is a member of the SAG-AFTRA One Union (professional actor’s union) and has appeared in “General Hospital”, “The Color Purple”, “Homeland” and “Hunger Games”. He appeared in Pearl Cleage’s show, Flyin’ West, with the Davidson Community Players through the courtesy of Actors’ Equity Association as well as performing his original one man show of seven historical Negro orators called, Reflections from the Past. He could be seen at Lee Street Theatre performing a play about the homeless to generate revenue for the Rowan Helping Ministries in Salisbury, North Carolina. He recently appeared in two productions this year: The Trip to Bountiful at Central Piedmont Community College and Herbert III at Livingstone College with colleague Angela Jacobs. Further information go to his website: http://mikacon.weebly.com.

SUNDAY FEB 25 2:00pm
WPAC, 9216 Westmoreland Road, will host the live performance by Michael Conner and a Q & A session about “The Foreshadowing of a People: Reflections from the Past,” or any other pieces in his body of work. The movie/documentary, “Filling the Gap” will also be shown.

The Big Bopper is back in the building! International jazz recording artist Calvin Edwards makes his highly-anticipated return to the #OTPH stage THIS SATURDAY, Feb 10 (8:00 pm-11:00pm)!

This is a MUST-SEE show so mark your calendars and come enjoy a special performance that you simply won’t find anywhere else… LIVE at Old Town!

Here’s the scoop on the #locallegend:

Born in North Carolina’s King Mountains, Calvin Edwards has gradually honed his talents and skills over the years, to the point where he is now recognized internationally as an awe-inspiring artist. When he was seventeen years old, Calvin joined up with a famous Gospel group known as the Five Blind Boys of Alabama.
He used his voice spectacularly in that setting for many years, before moving to L.A to play with his brothers’ musical group: the Jett Edwards Band. In that time, the siblings recorded two separate albums together.

His Performance Experience:
Calvin has played numerous venues in his time as a musical performer, including the G8 Summit in Okinawa for President Clinton, China, and Tokyo.

Franklin Kernes (F. Kernes) was the debut artist exhibiting at Old Town Public House and several pieces in his collection have returned for a second strike. Kernes will be in The House to perform a live painting to accompany the performances of Connor and Edwards Friday Feb 9 and Saturday Feb 10. His art will be on exhibit all month long.

The Artist
Franklin Kernes is a contemporary abstract artist from North Carolina specializing in acrylic. His creative growth began early in childhood, inspired by family, teachers and the world around him. He has always taken an interest in optical illusions and organic shapes in nature (trees, clouds, roots). Throughout art filled years in school Kernes won numerous awards and recognition. After high school, even though he had much success in fine art, he decided to pursue graphic design. While studying at the Art Institute of Charlotte, Kernes was reintroduced to the world of fine art and exposed to many different artists and styles. Although his focus was in graphic design, there was always that love for painting. After graduation and a career in design, this budding creative artist has made an impressive return to the brush.

Kernes’ work is characterized by colorful backgrounds accompanied by hypnotizing, bold, black lines. Despite it being early in his career, Kernes is gaining a lot of attention. His paintings can be seen in galleries, homes and businesses in the greater Charlotte area. Recently his work has traveled across international waters with collectors to Germany, where it hangs alongside the likes of artists like Norman Rockwell.

From beginning to end I try to take the passenger seat and let the piece create itself. To me, every project has its own feel or energy. Once I am able to identify with that, I try to zone out as much as possible. Using a range of materials, I tend to apply the paint (acrylic) with a fair amount of water. There is something about incorporating a natural element. Building layers of color and bold black lines while rotating the canvas creates a multidirectional finished piece. Both line and color working in harmony. 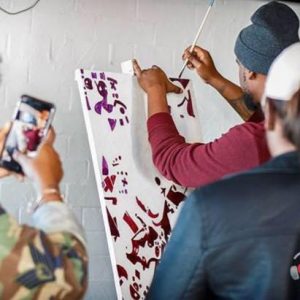 My inspiration comes from my experiences and environment (shapes in nature, trees, clouds, etc.). I’ve always had an interest in puzzles and optical illusions; I believe these things are reflected in my work. There is a complex simplicity, a marriage of background and foreground, seemingly endless compositions within compositions… But one line changes everything. These compositions are hypnotizing to the eye while the brain attempts to make sense of it all. Ultimately, making the work unique to every viewer. –Kernes