“Music spoke to me in a way other things didn’t,” Wilson said. After years of begging his parents, he got his first electric guitar at age 11 and hasn’t stopped playing since. Now, he is working to share his passion with others.

The founder of Learn Music, a Cornelius center for music lessons, Wilson first began teaching guitar lessons more than a decade ago as a way to supplement his income. He knew he loved playing guitar and he knew he loved writing music, and in offering lessons he discovered he also loved teaching.

Wilson was born in Charlotte, but grew up in a Los Angeles suburb. In his early 20s Wilson moved back east to Lake Norman, worked several jobs, and continued to give guitar lessons part-time. Word spread, demand was high, and soon he was giving as many as 40 lessons per week.

“I got to a point where I realized I could just teach for a living – something I really enjoy,” he said. And to do it right, he and his wife, Rachel, knew they needed a brick-and-mortar home for their business.

At about the same time, Case Warnemunde (our OTC publisher) had started his arts and culture initiative Bella Love and was gaining momentum. The Wilsons sub-leased their first location – in Studio 13 – from Warnemunde.

“Rachel and I were really impressed with what Case was doing,” Wilson said, and they wanted to be a part of the movement. Cornelius residents themselves, the Wilsons loved the chance to be active in the community and the ways teaching strengthened their connection to the community.

About two years ago the Wilsons opened Learn Music, and since then have grown their team from one instructor (Wilson) to 10, offering lessons in guitar, bass guitar, piano, drums and ukulele. At Learn Music the instructors customize lessons to engage students and foster collaboration among musicians.

“We’re starting to see the fruit of our efforts,” Wilson said. “For example, we’ve seen a lot of our students plug into the local music scene, which is exciting.” 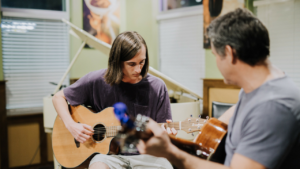 He credits the Learn Music instructors with much of that success, as their passion for music is contagious.

“We have an amazing team of teachers,” Wilson said. “Talent isn’t enough to teach at Learn Music. We get 30 or 60 minutes one-on-one with our students – few other professions give you that opportunity to impact someone. We’re not just developing the musician; we’re developing the person. Our instructors need to be great people as well as great musicians.”

Learn Music welcomes students of all levels, with some as young as five and as old as 87.

“Music is one of the most accessible activities for people to take part in that gives them a way to express themselves,” Wilson said. “Music taught me who I was, and I want to help others find that outlet.”