Be prepared to eat, drink, have a good time and most importantly, raise money to help Alysia and her family! 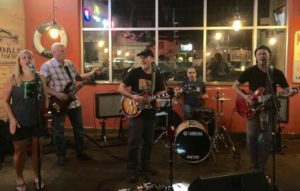 On Sunday, April 9th local pub Old Town Public House will be hosting a fundraiser for Alysia Pera and her family. Those of you who used to frequent the Upper Crust in Davidson likely know Alysia as she is a server there. Alysia was recently diagnosed with Stage 2 triple negative metastatic breast cancer and has begun treatment. Thankfully her cancer has been caught early. She and her husband Sean both work in the restaurant industry but Alysia cannot work as she is undergoing her treatments. They are a sweet young couple with a two-year-old son named Adyn.

The #OldTownCornelius community is invited to OTPH for a fundraiser to raise money for Alysia Pera and her family. The HC Oakes Band, Rusty Knox, and others will perform throughout the night. Doors open at 4:00. Music starts shortly thereafter. The Carolina Smash Truck will be joining the event on from 4:00-9:00, and they are giving 15% of the proceeds back to the fundraiser!

Old Town Public House will be accepting donations throughout the night to a YouCaring CrowdFunding Page. You can start donating now by clicking on the link below. Every little bit makes a difference!