A guy walks into a bar.

That’s the only thing commonplace about this story. What started as a casual visit to a favorite local watering hole resulted in a great act of kindness, with one Old Town Cornelius community member going above and beyond to help another.

The first man is Joshua Q. Crocker Osborne,(pictured above, left) a military veteran and nurse who lives in Antiquity with his wife, Verena, and twins, Hailey and Amanda. He met the second man, town historian and local celebrity of sorts Jack Conard, Jr (above, right) at Old Town Public House about a year ago and the two struck up conversation.

But, conversations with Conard rarely remain casual, and this one was no exception, as he proceeded to share story after story of the rich, real, and at times raucous history of the town.

“I’ve always loved history,” Crocker Osborne said, so talking with Conard was a treat. The two struck up a friendship.

A Friend in Need

Fittingly, historian Conard lives in a historic home in Old Town, the front of which was built in the early 1900s and the back of which was built by Conrad himself, using an eclectic mix of salvaged supplies, like the stained glass windows from old churches and bars.

“You can’t help but stop at the doorway and say, ‘what did I just walk into?’” Crocker Osborne said.

In addition to the eclectic architecture, the walls are covered in historic photographs, a wallpaper of sorts that tells the story of Cornelius.

Recently, Conard invited Crocker Osborne and others to his home to watch the town Christmas parade. During that visit, Crocker Osborne discovered that Conard’s water heater had rusted more than two years ago and he had been living without hot water since.

“I couldn’t imagine living without hot water,” Crocker Osborne said. “When I found out, I just thought…Why? Just why?”

He also noticed there were portions of the roof that were missing insulation, and other areas in need of repair. He wanted to do something about it. He started a GoFundMe campaign to try to raise money for a hot water heater.

Initially he set the amount at $500, which he raised through donations from community members within hours. So he increased it to $800, with plans to address the other home repairs needed. That goal was met within days.

“I knew Jack was popular in town,” he said, but he was surprised at just how willing people were to help, and how quickly.

On Thursday, Crocker Osborne and others spent the day at Conrad’s making much-needed improvements, warming not only Conrad’s water, but also many hearts.

Below is a hand-written letter from Jack Conard thanking everyone who contributed to the project. 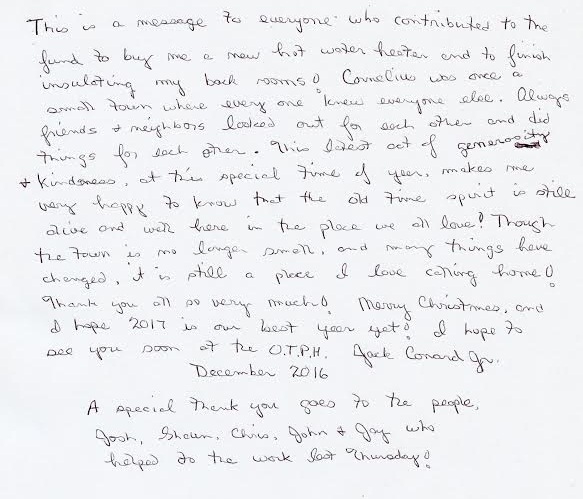 Fun Fact: Josh gives back not only to our community humans, but to our animals as well. An avid home brewer, he recently made a small-batch double IPA named “The Dog’s Meow” that D9 Brewing Company agreed to sell, with proceeds benefiting the Cornelius Animal Shelter. 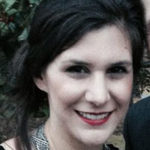